I was working on a piece of malware for a Rendition Infosec client recently and noticed a novel malware sandbox evasion.  Malware often tries to determine if it's in a sandbox and if so, performs different functions than when it is on an endpoint system.

This particular malware enters a loop and tries to connect to www.google.com.  If the malware connects successfully, it goes on and does bad things.  If not, it sleeps and does it again.  And again. And again. Good news for sandbox evasion: until the malware successfully connects to Google, there's no way that you'll see anything bad.  For this (and other) reasons, this malware had really low detection and had no trouble bypassing antivirus on the client's system. 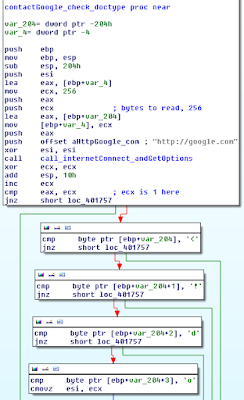 The attacker knows however that tools like FakeDNS and a simple HTTP server could easily trick the malware into thinking it was on the Internet.  But here the attacker reads the data returned and checks the first four bytes of the return to find "<!do".  This string is likely the "<!doctype html>" tag that is found at the start of the Google website (and others).  I checked a few sandbox programs that try to mimic the Internet and most of them just serve up an HTML page without the "<!doctype html>" tag.  I'd recommend adding this to your sandbox program if your sandbox is configurable.